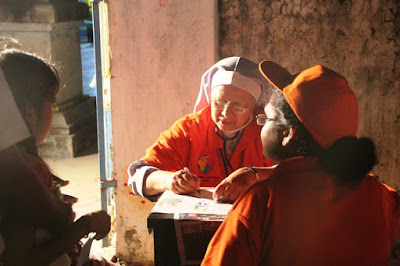 A Heap of Waste was all that was left....

9 months pregnant woman describes her ordeal through the floods. As the waters started invading her little hut, Thankamani who was 9 months pregnant at that time put her strength together to climb on to her cot. She then placed a bench on it to stay safely above the water level. She stayed that way long until it was dark. By then electricity had failed and with the water level climbing higher, she managed the worst for herself.

Fortunately for her, she was rescued in time by her father and brother. They swam her to a school where they took shelter along with some others.  As the school had no food supply they had to move. Weary and hungry after carrying Thankamani for over an hour, her father and brother reached a relief camp where they survived for the next 4 days on dry bread and water.

When they finally returned home after the floods receded, they found that they had lost everything- ornaments, clothes, utensils and furniture. What was left was only just a heap of waste!
When she came to see the doctor at the Camillian Task Force Medical Camp at Rajiv Gandhi Nagar of Thiruvallur District dated Dec. 14, she was still suffering from that horrific experience. She was still suffering from body pain and mental trauma. Tears dropped down her eyes as she spoke to us. Even though her loss of property was irretrievable, she said the flood brought her closer to her family and strengthened her relationships with the fellow beings who faced the sufferings alongside her.

Analysis based on our medical camps in Thiruvallur district, Chennai

Going by the medical camps organized between December 13-17 across 24 different locations of Thiruvallur District, Women (46%) and Children (33%) were the most vulnerable groups, followed by men(20%). A small group of 13 pregnant women were also  listed among the total of 5.7 thousand people that benefited from the medical camps organised by Camillian Task Force  in association with Caritas India Network.

Analgesics (Diclofenac, Aceclofenac) were the medicines used to treat arthralgia and arthritis, the second most common symptoms, after common cold, cough and fever. Though not flood related, due to the poor nutritional status, poor personal hygiene and poor environmental sanitation, worm infestations, vitamin deficiencies and anaemia were the other illness that were rampant. Other medical conditions like tonsillitis, pharyngitis, otitis and acute gastro enteritis were also seen among these groups. A limited number of anti-biotic also were used to treat these conditions.